So I had an epic Air fryer Burrata Fail the other day, while trying to air fry the gooey cheese in wet batter. Now I love Burrata and literary would put it on top of every single dish I endeavor, hence I thought why not try to air fry it?

While I have heard a lot of recommendations against using wet batter in the air fryer, I decided to test for myself and see what comes out of it. Needless to say, it was an epic fail.

The Reasons I failed

To start with, I think the batter I used was just too wet. I had recently purchased some “No need for an egg” batter from a Japanese store and thought to give it a try. While the mixture and consistency seemed correct, it was too wet for what I trying to achieve. Second of all, I should maybe have frozen the battered burrata before placing it in the air fryer. Instead, I froze it beforehand, then battered it and stuck it right inside the heat! Rookie mistake, indeed. Last but not least, I did not preheat the air fryer. I know, in most cases, I would never do this as it contradicts the reason for using an air fryer, which is its speed cooking. However, in this case, the already heated appliance might have helped the air frying process.

So what lesson have I learned? Well, I may be attempting this again in the near future, however using panko breadcrumbs instead. I believe they would work better, coating the burrata and sticking to create a crunchy surface.

If you are a fan of grilled (air fried) cheeses, you would need some skills to make it happen. Do check out my Air Fried Baked Camembert, for instance, which came out perfectly from Attempt No1!

All in all, failing in cooking is fairly normal. I love sharing my Air Fryer Burrata Fail with you since it may be beneficial for some contemplating trying it. The trick is – keep on trying!

The Idea of AirFryerChick came to me after I had received an air fryer as a birthday gift.

I definitely was not excited about it.

Coincidentally, my oven broke soon after so I was forced to learn how to airfry.

Now I cannot imagine my life without my Airfryer!

A very Merry and Cranberry Christmas treat for Day

A very Merry and Cranberry Christmas treat for Day

Starting off this week of #Airfryer #Snacks with t

In case you MISSED IT …

Kicking off this week A

Kicking off this week AIR FRYER FALL FESTIVAL with

Saw this the other day on Buzzfeed and havent been

Ok folks, so I can see in the Story most of you ar

First attempt with Artichoke – much to learn 😅

Check out our new Recipe eBook! 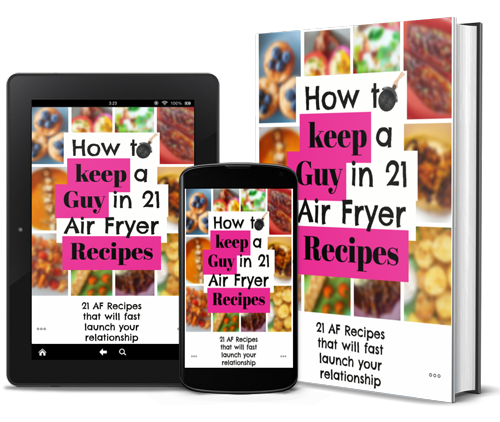 This will close in 17 seconds

We use cookies on our website to give you the most relevant experience by remembering your preferences and repeat visits. By clicking “Accept”, you consent to the use of ALL the cookies.
Do not sell my personal information.
Cookie settingsACCEPT
Manage consent

This website uses cookies to improve your experience while you navigate through the website. Out of these, the cookies that are categorized as necessary are stored on your browser as they are essential for the working of basic functionalities of the website. We also use third-party cookies that help us analyze and understand how you use this website. These cookies will be stored in your browser only with your consent. You also have the option to opt-out of these cookies. But opting out of some of these cookies may affect your browsing experience.
Necessary Always Enabled
Necessary cookies are absolutely essential for the website to function properly. This category only includes cookies that ensures basic functionalities and security features of the website. These cookies do not store any personal information.
Non-necessary
Any cookies that may not be particularly necessary for the website to function and is used specifically to collect user personal data via analytics, ads, other embedded contents are termed as non-necessary cookies. It is mandatory to procure user consent prior to running these cookies on your website.
SAVE & ACCEPT